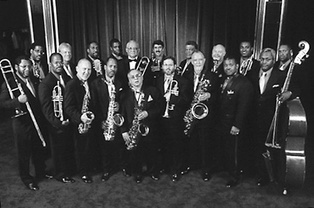 An American Institution for over 50 years, the COUNT BASIE ORCHESTRA remains a vital force in American Jazz music – an art form they helped create.

William Basie took the name “The Count” as a young pianist and officially began The Count Basie Orchestra in Kansas City’s famed Reno Club in 1936.   Live radio broadcasts from The Reno Club led jazz critic and producer John Hammond to signing Count Basie to a recording contract.  The rest as they say is history.

The height of the Basie Bands popularity was from the 1940’s through the 1960’s where only the great Duke Ellington only rivaled him.  During this time all the top vocalists of the 20th Century collaborated with The Basie Band including Ella Fitzgerald, Sarah Vaughn, Joe Williams, Rosemary Clooney, Tony Bennet, & Frank Sinatra.  This tradition continues today with collaborations with Nancy Williams, Liz Wright, Freddy Cole, Joey DeFrancesco, Patti Austin, & Ledisi.

The strength and meaning of Count Basie’s music is evidenced by the fact that nearly 20 years after his death in 1984, the Basie Band continues to tour the world and is one of the most in demand jazz groups of the 21st century

The COUNT BASIE ORCHESTRA of today is 19 performers committed to upholding and advancing the music of COUNT BASIE.

12 Best Big Band Awards from Downbeat Magazine in the past decade.

“The outfit blew the roof of Segerstrom Hall during a spirited Sunday afternoon gig before a large, wildly enthusiastic crowd.”
-Orange County Register

-The Best of Count Basie
(Decca)

-On My Way and Shouting Again
(Verve MGV)