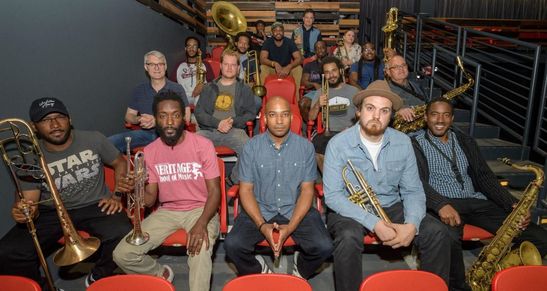 The New Orleans Jazz Orchestra was formed in 2002 and was designed to celebrate and fortify the American Jazz portfolio while providing infrastructure for developing the New Orleans Jazz Industry. Led by Artistic Director Adonis Rose, this 18-piece big band has an ever-increasing repertoire that exemplifies the influence of Jazz as the grandfather of all modern American music and as such the band and its members are true Ambassadors of American Music.

The members of the orchestra span several generations and have over a hundred years of combined professional experience.  They have performed and recorded with a veritable who’s who’s list of artists across all genres.

Vocalist, Ledesi is a frequent guest of the orchestra and is available for dates on their Congo Square Tour,  a presentation of  New Orleans history through music.  Other special guests can include Cyril Neville and John Boutte.  This program is also available as an educational component to accompany select concerts and can be customized for primary, secondary collegiate and community audiences.

The NOJO is also especially proud of their ability to present many small ensembles within the Orchestra, including Rose’s modern brass and outfit, The NOJO 7.

Their long-awaited album “Songs “ is set for release in Spring 2019 and debuts the orchestra’s original arrangements of classics and obscurities from Allen Toussaint catalog.

The Orchestras unique sound and spirit thrives upon the talent and versatility of the musicians of New Orleans and their concerts redefine the big band experience.

The New Orleans Jazz Market is the only stand-alone facility in New Orleans designed specifically for Jazz. It was thoughtfully crafted to be a performing arts venue and Jazz community center for the Central City neighborhood and Greater New Orleans region. The Jazz Market features a 340-seat theater, the full service Bolden Bar, a 750-piece reading library, the New Orleans Jazz Archive, tributes to current and past Jazz Masters. The Dee Dee Bridgewater Stage plays host to performances by the New Orleans Jazz Orchestra and other renowned musicians.

The City of New Orleans:

Known as the birthplace of jazz, New Orleans has a rich musical legacy, having spawned such legends as Louis Armstrong, Louis Prima, Jelly Roll Morton and many others. New Orleans' legacy continues today, not just with jazz and Dixieland styles, but also in genres like hip-hop, R&B, rock and even metal. Master P, Lil Wayne, Mahalia Jackson, Harry Connick, Jr., Trent Reznor and Better than Ezra all have roots in this area, among others.

"The music was vibrant and swinging, facts to which the sold-out crowd attested with raucous cheers for soloists like saxophonist Khari Allen Lee, who burned his way into the climax of their take on Stevie Wonder’s “Golden Lady.” - JazzTimes Magazine

"Adonis Rose and the New Orleans Jazz Orchestra look forward to presenting a holiday performance in early December and offering full spring and fall concert seasons. Rose, as well as fans and supporters, are ready to see NOJO go from zero back to 100 again."   - Offbeat Magazine