​ "I may be a man of few words to some, but the music I’ve produced 'says it all.' I am deeply grateful and humbly moved to be acknowledged and honored for the embodiments of my jazz works which has lasted for over more than a half century."

NEA Jazz Master, Ferrell “Pharoah” Sanders, is a legendary jazz saxophonist who has shown a remarkable facility performing in a variety of styles—from free to mainstream— displaying what has been called “hard-edged lyricism.” Emerging from John Coltrane's groups of the mid-1960s, Sanders is known for his distinctive sound. His work embodies the spiritual foundation of avant-garde jazz and he has shaped his own sonic world that encompasses the primal wails and fierce energy of late Coltrane and the stomping R&B of his Little Rock youth, Asian modes and Moroccan grooves, while balancing his explosive improvisations with gentle ballads of sublime simplicity.

Pharoah’s saxophone sound is unforgettable -- deep, raw, humming with overtones and laden with fervent feeling and serene beauty. Sanders’ recordings include the classic “The Creator Has a Master Plan,” from his 1969 album Karma and 1996’s Message From Home, a compelling mix of funky African chants, pastoral songs and highlife grooves. “I like a dark sound with more roundness, more depth and feeling in it,” Sanders said at the time. Mr. Sanders recorded history includes over 40 albums as a leader. All Music Guide lists over 800 credits as a composer and / or multi-reedist (soprano, tenor, flute, piccolo, clarinet) spanning decades going all the way back to 1955.

Saxophonist Ornette Coleman once described him as "probably the best tenor player in the world.”

Sanders was born into a musical family and he took up the clarinet as a child. In high school, he was first exposed to jazz by his band director and switched to the tenor saxophone and soon played blues gigs around Little Rock. After high school, Sanders moved to Oakland, California, studying art and music at the Oakland Junior College. Known in the San Francisco Bay Area as "Little Rock," Sanders expanded his repertoire to include bebop, rhythm and blues, classical, and free jazz, performing with musicians such as Ed Kelly and Smiley Winters.

In 1961, he moved to New York City, where he first began to use the name "Pharoah." Sanders formed his first group in 1963, with pianist John Hicks, bassist Wilbur Ware, and drummer Billy Higgins. However, he came to greater prominence playing and recording with John Coltrane's band, first on the album Ascension and then on their dual-tenor recording Meditations (both 1965). Sanders was strongly influenced by Coltrane, including spiritual elements such as the chanting in his release Om. In 1968, he participated in Michael Mantler and Carla Bley's Jazz Composer's Orchestra Association album The Jazz Composer's Orchestra. A year later, Sanders recorded one of his most commercially successful albums, Karma, featuring the 32-minute track The Creator Has a Master Plan with vocalist Leon Thomas's unique yodeling and pianist Lonnie Liston Smith.

In the 1970s, Sanders began experimenting with African rhythms, such as on his 1971 album Black Unitywith bassist Stanley Clarke, which continues to influence his music (in 1994 he traveled to Morocco to record The Trance of Seven Colors with Gnawa musician Mahmoud Guinia). Towards the end of the decade and into the 1980s, he continued to explore other styles of jazz, such as modal and hard bop, and ventured into rhythm and blues.

In 1988, Sanders received a Grammy Award (along with McCoy Tyner, Roy Haynes, Cecil McBee, and David Murray) for the album Blues for Coltrane: A Tribute to John Coltrane. He continued to perform and record all through the 90s and into the present day.

“He’s a musician who represents more than the notes he plays; he stands for the late ’60s, but also for a generous and open way of expressing and sharing music. You hear it in his broad sound and his raspy long-tones and chaotic spirals of improvising between chords: seriousness, awareness.” – Ben Ratliff New York Times

At age 75, Pharoah Sanders continues to actively tour both nationally and internationally. 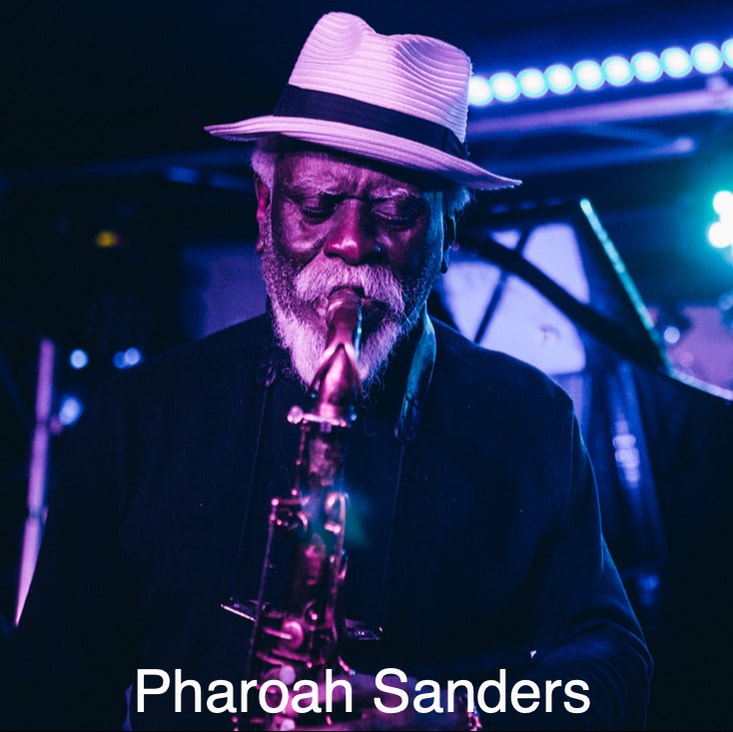 “Pharoah Sanders’ performance showed that age is just a number. He still negotiates the chord changes with ease and finesse and his inner child is still very much alive!” – Gary G. Vercelli, Capital Jazz Radio

“He is still one of the greats!” – John Lewis, The Guardian (London)

“Pharoah Sanders is a famous musician from the urgent and spiritual elite of 1960s jazz, a tenor saxophonist with a sound like midnight riptides, the last living member of John Coltrane’s final band.” – Ben Ratliff, New York Times

“Pharoah originally earned his status as a larger-than-life icon, whose impact stretches far beyond jazz. And maybe beyond music itself.” – Brad Farberman, Rolling Stone
​