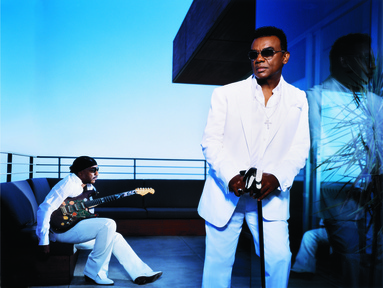 Recognized as one of the most important and influential groups of the last half-century, the Isley Brothers, featuring Ronald Isley and Ernie Isley, continue performing to sold out concert halls and enthusiastic audiences throughout the world.

The Isley Brothers were formed in the early 1950s in Cincinnati, Ohio. Though raised primarily on the sounds of gospel music, the family band went on to experiment and record under the genres of Doo-Wop, R&B, Rock n’ Roll, Soul, Motown, Funk, Quiet Storm, Disco, Pop and Hip-Hop, all the while remaining true to their vision and voice. After leaving Cincinnati in 1957 for New York City, the group scored their first hit with the call-and-response classic “Shout” (now covered by countless bands across the country) and in 1962 reached true mainstream success with “Twist and Shout,” which became their first Top 40 hit on both the Pop and R&B charts. At the end of the decade, The Isley Brothers scored another phenomenally successful hit with “It’s Your Thing" which earned them the 1969 Grammy Award for Best R&B Vocal Performance, which then lead them into the1970s, proving to be their most successful and artistically compelling and influential period.

With the addition of virtuoso guitarist, multi-instrumentalist and songwriter Ernie Isley, brother Marvin Isley on bass, and brother in law
Chris Jasper on keyboards, the Isley Brothers now became a fully functional family band, whose brand of funk and soul music is still strongly felt to this day.

Their first official recording as a sextet, the 1973 gold album, 3 + 3, featured the Latin percussive rock classic “That Lady” and cunning arrangement and blow out performance of the Crosby Stills and Nash classic “Summer Breeze”.

It would be 18 years between the Isley Brothers topping the R&B charts again with “Eternal” (2001, Dreamworks), which featured the
single “Contagious”.  The band now featured Ronald Isley and Ernie Isley, and R. Kelly serving as arranger and producer for this and the next two recordings.   Their next album “Body Kiss” (2003, Dreamworks), featured the top 40 hit “What Would You Do”, and was the first
Isley Brothers album to reach #1 on the Billboard Pop charts since the 1975  album “The Heat Is On”.  “Baby Makin’ Music” (2006, Def Soul Classics) would reach #1 on the R&B charts.

The Isley Brothers are of the rarest breed in the history of recorded music,  maintaining a special and vital place for nearly fifty years.
In all, they have produced ten  #1 albums on the R&B charts, six #1  singles on the R&B charts, four Top 10 singles on the Billboard Pop charts  and two #1 albums on the Billboard Pop charts. Thirteen of their albums have either  been certified gold, platinum or multi-platinum by the RIAA.

The Isley Brothers will embark on a tour of Europe in July of 2014. Concert offers are currently being accepted from select concert halls throughout the world.