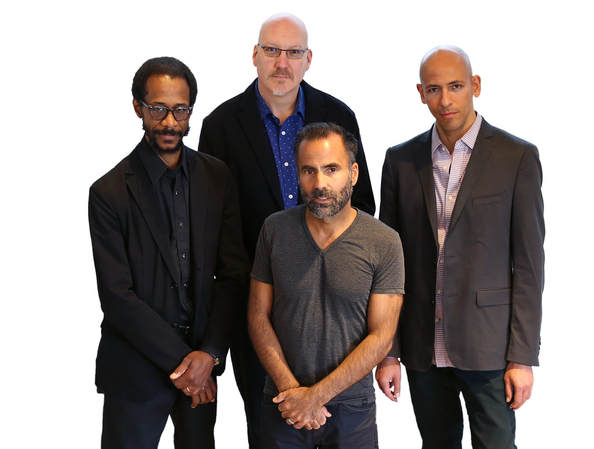 Afinidad is a forward-minded jazz ensemble co-led by pianist Edward Simon and saxophonist David Binney, with the kidred-spirit rhythm section of bassist Scott Colley and drummer Brian Blade.  Simon, is a Venezuela-bred, California-based pianist determined to tap both his Latin heritage and his modern jazz sensibility, “without sacrificing anything on either side.” Binney, a Miami-born, Southern California-bred, New Yorkbased saxophonist has always had a wide-open, self-actualizing artistic energy. They are buttressed by the complementary and virtuostic aesthetics of Colley and Blade, distinguished bandleaders and composers by their own right.

Afinidad has performed at some of the finest festivals and venues around the world, from Bimhuis in Amsterdam, Duc Des Lombards in Paris and Casa del Jazz in Rome to the Jazz Standard in New York City, Folly Theater in Kansas City and Walton Arts Center in Arkansas.

Chamber music America recently commissioned Simon to compose House of Numbers, a new work for Afinidad and wind quintet featuring Imani Winds that premiered in July 2016 at the SFJAZZ Center in San Francisco to rave reviews.

“Binney and Simon have emerged, over the past decade, as leaders in an evolving musical context informed by broader cultural concerns, often complex harmonic and rhythmic foundations, and a fresh thematic approach that’s eminently lyrical yet steadfastly avoids the obvious. Both are fine soloists, able to combine a sense of the cerebral with deeper emotional resonance.” - AllAboutJazz.com