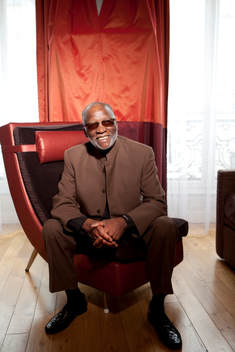 Celebrated pianist/composer Ahmad Jamal continues to tour throughout the world, as he has for the past five decades. Noted for his outstanding technical command and identifiable sound as a piano stylist, Mr. Jamal ranks as one of the most influential and popular artists in the history of jazz music.

Ahmad Jamal is one of the few jazz artists to ever sell over one million copies of an individual recording with But Not For Me (Chess Records), featuring the hit single “Poinciana,” which remained on the charts for an unprecedented 108 weeks.

Considering his group “an orchestra,” Mr. Jamal not only achieves a unified sound, but subtly inserts independent roles for both bass and drums.  The hallmarks of Jamal’s style are rhythmic innovation, colorful harmonic perception, and the unique sense of space in his music– making his concept exciting without being loud in volume.

His current release, Marseille (Harmonia Mundi, 2017), opened at the top of the jazz charts and shows Ahmad Jamal and his quartet at the peak of their art pushing original compositions and classic standards to their rhythmic and harmonic heights.

His previous recordings Saturday Morning (Harmonia Mundi, 2013) was an instant classic, and Blue Moon (Harmonia Mundi, 2012) was nominated for a Grammy, A Quiet Time (Dreyfus, 2010) reached number one on the JazzWeek radio charts, and It’s Magic (Dreyfus, 2008) garnered the prestigious Les Victoire Du Jazz Award, the equivalent of a Grammy Award in France.

​After a brief retirement, the maestro has begun to accept concert engagements for the 2018/2019 concert season.  And his rare concert appearances have become cultural events.
The Critics Speak:

Ahmad Jamal: "The Essence, Part I (Verve). The rows of shocking diversions and riffs on this new album by a 1950's master could be mistaken for the work of a younger, experimental-minded pianist."
Ben Ratliff, "The Living Arts", The New York Times

"No musician has had a more profound effect on the orchestral approach to small groups in the last 35 years than Ahmad Jamal ... He showed people how to italicize and magnify elements of music that were taken for granted, how to organize the sound of a group around the drums and how to interchange the riff with the ostinato or the vamp ... He is a virtuoso, but his innovations are found in his arrangements......
Stanley Crouch, The Village Voice

"Ahmad Jamal is to me, the most exciting, creative keyboard artist living. John King, Melody Maker "Given [Miles] Davis great influence on other musicians, the cumulative effect has been incalculable; not only pianists with Miles, but everyone who has imitated them as well reflect the works of Jamal to some degree."
Jazz, The Rough Guide - Penguin

"Jamal's colorful harmonic perception has been too often overlooked. He characteristically builds parallel and contrary motion lines that move in and out of chordal substitutions and alterations that would probably frighten pianists of less harmonic sensitivity...In his use of pedal point ostinato interludes as a method by which to build and release energized musical tension, Jamal has brought the bass and drums into an independent but highly functional role in his conception of the piano trio. He has always been one of jazz's foremost exponents of good songs."
Don Heckman, LA. Times

"A soloist who defies practically every convention of the jazz pianist's art. This is a man uninterested in playing easy backbeats while his sidemen indulge in extended solos, a musician whose mercurial improvisational techniques require an unusually nimble set of fingers ... Startling chord clusters, outrageously elastic tempos, sharp dissonance between the hands, rhythmic ideas that ignore the meter of his sidemen--Jamal reveled in defying conventional approaches to the keyboard ... the pianist manages to bring coherence to improvisations that shift constantly between swing rhythm and meterless playing, between single-note riffs and extended parallel chords in both hands."
Howard Reich, Chicago Tribune

“All my inspiration comes from Ahmad Jamal.”
- Miles Davis