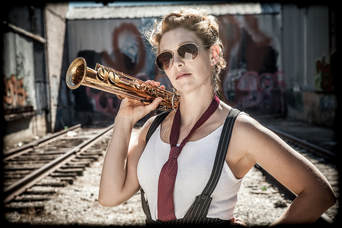 New Orleans based saxophonist, clarinetist, singer and musical conceptualist  Aurora Nealand has always been a bit of an enigma — a thoroughly modern artist who works in a traditional vein, at least some of the time. As much can be said for her band The Royal Roses.

The band first made waves when Ben Jaffe invited Nealand to interpret the music of Sidney Bechet at Preservation Hall in 2010. That concert and resulting album garnered the attention of HBO’s Treme - where Nealand landed a reoccuring role playing herself.

Nealand grew up in California and traveled the world in pursuit of her passion earning a composition degree from Oberlin Conservatory and training at Jacques Lecoq School of Physical Theater in Paris. A cross-country bicycle trip compiling audio stories led her to New Orleans, where she moved and began her musical career in 2004.

Although Nealand has performed solo and as part of several sought after bands in New Orleans, The Royal Roses is her first venture as a bandleader. The group consists of Nealand on (reeds/vocals), Matt Bell (vocals/guitar), David Boswell (trumpet), Nathan Lambertson (bass), and Paul Thibodeaux (drums).

The Royal Roses draw musical inspiration from the Afro-Carribean flavors of Sidney Bechet, Bessie Smith and Buddy Bolden in an attempt to breathe new vigor into the genre while still honoring it. The same year that Nealand formed the band, she was voted one of Downbeat Magazine’s top 10 rising stars for soprano saxophone, and the group’s first album “A Tribute to Sydney Bechet: Live at Preservation Hall” has since gained national acclaim. Their 2014 release The Lookback Transmission includes more obscure selections from the genre and 2016’s Come Back Children further twists the genre, while taking listeners on an ecclectic sonic journey from Duke Ellington to Tom Waits.