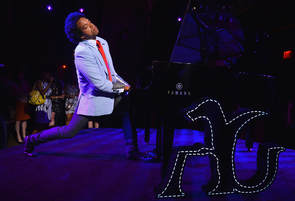 Once upon a time, Eric Lewis was a decorated, up-and-coming jazz pianist, a sideman for Wynton Marsalis and Elvin Jones, among others, and the recipient of the 1999 Thelonious Monk International Piano competition. A decade into his career, he had an epiphany. The songs he was playing weren’t speaking to him the way he wanted them to: while they were part of the traditional jazz repertoire, they weren’t part of his own emotional repertoire. On the other hand, there were contemporary rock songs whose lyrics meant the world to him. Lewis considered the landscape, drew the curtain, and reemerged as ELEW, a revolutionary artist who combines virtuosic skill on the grand piano with an unprecedented openness to modern pop and rock music.

Jazz pianists have always interpreted popular songs. Art Tatum did. Bud Powell did. But at some point, jazz detached from rock and roll. ELEW has fused the two together and, in the process, created a new genre, rockjazz. Over the course of two albums, ELEW has interpreted and reenergized songs by Coldplay, Nirvana, Radiohead, the Foo Fighters, The Bravery, Michael Jackson, and more. And the choice of material is only part of rockjazz. ELEW treats the grand piano the way a traditional rock front man treats the guitar, with an explosively physical style that includes entering the instrument to pluck the strings directly. Onstage, he is overtly theatrical, standing to play and even wearing specially designed pieces of forearm armor called vambraces.

In addition to his groundbreaking recordings and performances, ELEW has collaborated with a host of other artists. He joined forces with platinum-selling rapper Lil Wayne, providing the piano background for “IANAHB,” the opening track on Lil Wayne’s 2013 album “I Am Not a Human Being II.”  Last year, Complexions Contemporary Ballet Co-Artistic Directors/Founders Dwight Rhoden and Desmond Richardson announced a five-year partnership with ELEW that named him Composer in Residence at CCB. This partnership will yield a new work every year through 2017; the first fruits of the collaboration were presented in November 2012 at Complexions Contemporary Ballet’s New York Season at the Joyce Theater. Perhaps the most exciting development in ELEW’s evolution as an artist is his burgeoning career as a DJ. While turntable artists combine songs with the aid of technology, ELEW is able to present them simultaneously with his own mastery of the piano. The result is yet another unprecedented hybrid—this time, the ingredients are not rock and jazz, but rather vinyl and ivory, the concert and then the after-party.

As a result of his records and his performances, his devotion to both the history of jazz and the importance of redirecting that history, ELEW has earned a legion of prominent fans, including Josh Groban (who he supported on Groban’s “Straight to You” tour of more than sixty North American arenas), Dave Matthews, Naomi Campbell, Forest Whitaker, Leonardo DiCaprio, Brooke Shields, and Woody Harrelson. He has performed at the behest of Google, Fendi, Disney, and Mercedes Benz. Donna Karan included his music on her iPhone app. And ELEW has even taken rockjazz to the White House, where he played for Barack and Michelle Obama in the East Room.
In late 2015, ELEW performed an exclusive preview concert of his latest album And To The Republic with Jeff "Tain" Watts and Reginald Veal at Dizzy's Club Coca-Cola. “And To The Republic” was released in November, 2016. Since its conception the album has been praised by some of the largest Jazz outlets and publications in the world such as NPR's "Jazz Night In America" hosted by Christian McBride, Jazz-Times, Downbeat, All About Jazz and many more...

Lately, ELEW has been entrenched in the film world while splitting his time between NYC and Beverly Hills working on film compositions, screenplays and directing. You can still find ELEW being "a highlight of the party" around town and anywhere from Sundance's Film Festival, DJ'ing at various exclusive nightclubs, playing piano at ultra-exclusive private parties in "a $16 million penthouse at Art Basel", touring his latest album And To The Republic across the globe to even playing piano to a song written by IBM's super computer, Watson.

- This jazz rocks” - MARK F. TURNER, ALL About Jazz

​- ​“A highlight this year at Sundance Film Festival ”  - Alyson Krueger, Forbes Magazine
​
​- "​The prodigal son has returned to the fold with And to the Republic (Sunnyside), which is nothing if not the piano-trio record his champions hoped he’d make all along"​- Shaun Brady, JazzTimes