﻿Henry Butler-Steven Bernstein and the Hot 9﻿ 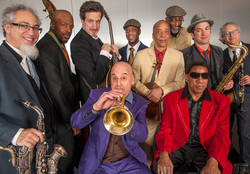 Henry Butler-Steven Bernstein and the Hot 9
Universal Music Group is reactivating the legendary jazz label impulse! with the release of Viper’s Drag, a retro-modern opus from Henry Butler-Steven Bernstein and the Hot 9 that is due out July 15 in the U.S. The new impulse!, which was reported yesterday in The New York Times,  is a division of Universal Music France headquartered in Paris that will be  distributed by Blue Note Records in the U.S. The label will focus on new  releases from artists including Randy  Weston, Kenny Barron, Jacky Terrasson, Ran  Blake, Rodney Kendrick,  Sullivan  Fortner, Jean-Luc  Ponty/Stanley Clarke/Biréli Lagrène,  Madeleine Peyroux, and a  previously-unreleased live duo album from Charlie Haden and Jim Hall recorded at the Montreal International Jazz Festival in 1990.

Founded in 1960 by Creed Taylor who was succeeded by Bob Thiele, impulse! quickly became the home of “The New Wave In Jazz” with landmark recordings from John Coltrane, Charles Mingus,  Gil Evans, Ray Charles, Quincy Jones, Duke Ellington, Sonny Rollins, Pharoah  Sanders, Art Blakey, Max Roach, Charlie Haden’s Liberation Music Orchestra, and many more. After falling inactive in the late 1970s the label was revived in the  late 1980s for releases from McCoy Tyner and Michael Brecker, as well as Henry Butler’s first two albums--Fivin’
Around and The Village—and later on Diana Krall and Alice  Coltrane.

Viper’s Drag is the happy collision of two perfectly matched musical sensibilities—that of the New Orleans singer/pianist Henry  Butler and trumpeter/arranger Steven Bernstein--two students of early jazz with decidedly modern voices. “Their  collaboration is both historically aware and fully prepared to cut loose,”
remarked The New York Times in an enthusiastic review of their recent New Year’s Eve performance at the Jazz  Standard.

Blind since birth, Butler tells stories through the rise, swing, and rumble of his fingers as they channel sounds as diverse as his Louisiana birthplace: jazz, Caribbean, classical, pop, blues and R&B, among others. A giant among giants, he is a member of a special brotherhood that also includes Professor Longhair, James Booker and Allen Toussaint. His technical ability and expansive repertoire are legendary.

A veteran of New York City's downtown scene and a GRAMMY-winning arranger, Bernstein juggles a forward-looking perspective with a ooted sense of what’s come before. Known for his work with The Lounge Lizards and Sexmob, he’s also the leader of the Millennial Territory Orchestra, a nine-piece ensemble that draws tunes and inspiration from the dance orchestras that toured the U.S. before World War II.

Though historical explorers they may be; neither Butler nor Bernstein can avoid incorporating the most modern and freer edge of today’s jazz expression into their music. Each has found ways of balancing past and future in their respective musical signatures. “Steve’s got this modern touch in his playing and his arrangements, avant-garde and beyond,” says Butler. Bernstein laughs and shakes his head: “I call Henry a space-traveler/historian.”

The two first worked together in 1998 in the Kansas City All Stars, a touring big band led by Bernstein that came out of the  Robert Altman film Kansas City. They  reunited in 2011 to perform a special, one-off concert at a blues festival in  New York City and the material they chose too that day—the classic blues of Bessie Smith, the first-generation jazz of Jelly Roll Morton, and other similar tunes—resonated in a way neither had expected. “We’ll do something like this again,” Bernstein remembers them promising each other.

Butler and Bernstein reassembled in 2012 for an engagement at the Jazz Standard. “We had to get tunes together since we’d be doing two sets a night,” explains Butler. “Steven came over to my place and he’d propose a tune, we’d play it and I’d feed ideas to him—he calls them ‘Henryisms.’ Then he’d work them out for the whole band, play them back to me and I’d have to come up with some new ideas all overgain. That’s how most of the arrangements came about.”

“We knew we had something special on the first set of the run,” recalls Bernstein. Veteran producer Joshua Feigenbaum was in the audience that night. He returned for most of their shows that week, convinced  the group had to record. Both Butler and Bernstein refer to him as the third  partner that made this album a reality. “This music is really the result of  three perspectives,” says Bernstein. “The song choices came from Henry and myself and I did the arrangements, plus we used most of MTO’s frontline players.  But the push to get this music recorded—and the idea for using an expert rhythm section like Reginald Veal and Herlin Riley—that’s Josh. He heard the value in this music and made this album happen.”

The music that Butler, Bernstein, and the Hot 9 have created together is filled with modern flavors, agile arrangements and a vitality that never allows the historical focus to limit itself to mere recreation. “We’re not trying to replicate New Orleans music or old-time blues,” says Bernstein. “We’re all musicians who have come out of other experiences, many of us in New York like working with Don Cherry and Wynton Marsalis and Lou Reed and Levon Helm. We’re taking that and then using the framework of Jelly Roll Morton and Fats Waller.”

“They were an ideal pairing,” concluded The New York Times in their review. “Mr. Bernstein and the Hot 9’s New York City
erudition and gusto worked to compound Mr. Butler’s encyclopedic New Orleans flair. They are partway through recording an album together: a promising project, indeed.”

With the release of Viper’s Drag, that promise has been fulfilled. Watch the album trailer here.
The tracklisting for Viper’s Drag is as follows: