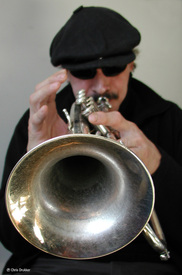 Jerry Gonzalez and the Fort Apache Band is dedicated to playing uncompromised Afro-Caribbean Jazz. The sophistication of the Fort Apache sound is highlighted by the group’s ability to bring a jazz flexibility to the Latin Rhythm section. As noted in the New York Times: "A Fort Apache tune may start out swinging with the feel of the drummer Art Blakey, then move into a Cuban guaganco, then take on a shuffle, then return to swing."

Jerry Gonzalez' first high profile professional engagement came at the age of 19, in 1971 with Dizzy Gillespie. Since then he has worked with masters from the jazz and Latin music fields such as: Kenny Dorham, Tony Williams, McCoy Tyner, Jaco Pastorius, Tito Puente, Eddie Palmieri, and Manny Oquendo Y Libre. Jerry Gonzalez' first session as a leader came in 1980 with the critically acclaimed recording of Ya Yo Me Cure on the American Clave' label. Following the success of Ya Yo Me Cure, The Fort Apache Band was formed, and included such members as Kenny Kirkland, Sonny Fortune, Nicky Marrero, Papo Vazquez, the late Jorge Dalto, and Milton Cardona. The ensembles first two albums were recorded live at European jazz festivals, The River is Deep, 1982 in Berlin: Obatala, 1988 in Zurich. 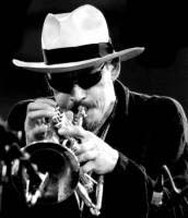 In 1989, Fort Apache recorded the groundbreaking Rumba Para Monk as a quintet featuring: Jerry Gonzalez (trumpet, flugelhorn, congas), Andy Gonzalez (bass), Steve Berrios (drums), Larry Willis (piano), and Carter Jefferson (tenor saxophone). Rumba Para Monk was named album of the year by the French Academe du Jazz, and resulted in the group being voted The Word Beat Group of the year in Downbeat's 55th annual Readers Poll. It is this recording that has been cited as leading the resurgence in Afro-Caribbean Jazz in the past decade.

The group became a sextet with the addition of Joe Ford (alto & soprano saxophone) for 1991's Earthdance (Sunnyside) and 1992's Moliendo Cafe (Sunnyside). Following the death of Carter Jefferson, former Fort Apache member John Stubblefield returned to the fold on tenor sax to record the Grammy nominated Crossroads (Milestone). The ensembles 1995 recording Pensativo (Milestone) also received a Grammy nomination. On the heals of the Grammy nominations for Crossroads, and Pensativo the ensemble was awarded The Beyond Group of the Year by both Downbeat Magazines reader's and critic's polls in 1995 and 1996.

Firedance (Milestone), Fort Apache's latest release was recorded in February 1996 at Blues Alley, in Washington DC and is the first live recording of the ensemble as a Sextet. Following this fiery recording, the ensemble won the award of Best Jazz Group in Playboy Magazines Readers Poll for 1997. In 1998 the ensemble swept the Latin Jazz category at the New York Jazz Awards winning both the Industry and Journalist Polls. In 1999 the group swept the critics and readers polls for Beyond Group of The Year in Downbeat Magazine.

In 2001 Jerry Gonzalez And The Fort Apache Band are prominently featured in Fernando Trueba’s film on Latin Jazz "Calle 54" (Miramax). This film has received great critical acclaim throughout the world and is being followed up by a series of concerts promoting the film including an engagement at The Beacon Theatre in New York City. The Soundtrack "Calle 54 - Music From The Miramax Motion Picture" is available on Blue Note Records.

The collaboration with Fernando Trueba has also resulted in the production of a new CD Jerry Gonzalez Y Los Pyrates Del Flamenco featuring Jerry Gonzalez along with a Gypsy Flamenco group that includes the esteemed Flamenco singer "El Cigala." The recording is currently available on the Spanish label Lola Records.

The success and historical relevance of The Fort Apache Band can in large part be attributed to its constant line-up, which has been in place since 1990. In Jazz music only The Art Ensemble of Chicago can surpass this longevity.

Andy Gonzalez is considered by many to be the premiere Latin Jazz bassist in the world. Indeed his stature in this field is not unlike that of Ray Brown's or Ron Carter's in the field of acoustic jazz. The list of musicians he has accompanied includes: Ray Barretto, Tito Puente, Hilton Ruiz, Steve Turre, and Dizzy Gilliespie. Furthermore, for the last 23 years he has co-lead New York City's most acclaimed salsa ensemble: Manny Oquendo Y Libre. He currently sits on the player’s advisory board at Bass Player Magazine.

Steve Berrios holds the third longest tenure in the Fort Apache Band and like Andy Gonzalez is considered by his peers to be the premiere Latin jazz drummer on the scene. He has recorded and toured with Max Roach, Mongo Santamaria, and Randy Weston. His solo outing, And Then Some on Milestone Records was nominated for a Grammy in 1996. 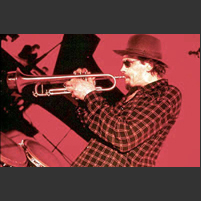 Alto Saxophonist, Joe Ford fist joined the Fort Apache Band as a last minute replacement for Carter Jefferson, and immediately the group decided to expand to a sextet to include his voice. Joe Ford's first recording with the ensemble was 1991 Earthdance for which he penned the title track. Joe Ford was a featured soloist with McCoy Tyner from 1985 to 1991. As a leader Joe Ford has released Today's Nights on Bluemoon records.

In its present form, Fort Apache realizes the vision of seamless Afro-Carribean Jazz, which the band members have pursued for most of their career - as Jerry Gonzalez himself describes it: "I don't want to compromise the rhythm, and I don't want to compromise the Jazz playing. The cats that play in my band have to understand how to play the blues and clave." With these ideals, the integration of world-class bebop and Afro-Carribean music, The Fort Apache Band has become one of the most respected and exciting ensembles in modern music.
The Critics Speak:

“Fort Apache clearly knows, with two idioms at its disposal, how to generate more then twice the usual musical rewards.” –Boston Globe

“If brilliance and esthetics were simply the product of a place, then plenty of New York bands would sound like Jerry Gonzalez And The Fort Apache Band.” –New York Times

“Jerry Gonzalez is an innovator in making Afro Carribean beats fit into hardcore jazz environments, especially on Ya Yo Me Cure and Rumba Para Monk,” –Downbeat Magazine