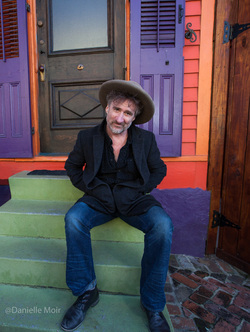 New Orleans’ best-kept secret, Jon Cleary, has a new record in the pipeline. His dream team of musicians has been recruited for an album of
original compositions that he feels strongly will prove to be his best album yet. The tracks were recorded over several days deep in the bayou country of Louisiana and subsequently honed in his studio in the old Bywater district of New Orleans. Made in collaboration with multi Grammy winning producer John Porter (B.B. King, Keb Mo, Ryan Adams, Los Lonely boys) each of the carefully crafted songs is a delicate balance of the smooth and the rough; instantly memorable hooks over a set of sophisticated and soulful arrangements. A blend of musical intelligence with direct, accessible pop simplicity that draws from the tradition and yet is distinctively separate from it, these songs represent the many aspects of Cleary’s musical personality as a multi instrumentalist, singer, and songwriter.

Cleary, English by birth, started his journey picking up the guitar at the age of five, surrounded by musicians in his family. His first performance in public was at the age of eleven and by fourteen was gigging on the UK pub circuit. He arrived in New Orleans at seventeen and got his first piano job subbing for the now legendary pianist James Booker at the Maple Leaf Bar. He further honed his skills when drafted as a sideman for the likes of Johnny Adams, Earl King and Snooks Eaglin and found himself playing long, late night gigs in the clubs of New Orleans and the road shacks of country towns in Louisiana, Texas and Mississippi. Since then he has pursued his own career, delighting audiences around the world as a band leader and solo performer, earning a solid reputation as being, amongst other things, a 'musicians musician'. He is acknowledged as a leading practitioner of what he calls 'his hobby', New Orleans style piano. Jon is a powerful and distinctive
vocalist while also having earned respect as a songwriter and arranger. He has been a sideman for the likes of Taj Mahal, Dr John, John Scofield and had a long association with Bonnie Raitt who described him as 'the ninth wonder of the world'. Through it all he has continued to work behind the scenes as a multi instrumentalist and an all-around session musician whilst developing a firm reputation as an artist in his own rite.

This will be the sixth album under his own name. Amongst the contributing musicians are drummer Terence Higgins (Ani Di Franco, Warren Haynes) bassist Calvin Turner (Raphael Saadiq), guitarists Big D Perkins and Shane Theriot (Absolute Monster Gentlemen, Neville Brothers), percussionist Danny Sadownick (The Roots, Christian Mc Bride, Steely Dan), horns by the Dirty Dozen and Lettuce and extra keys by Nigel Hall (Soulive). The record features new songs, each stylistically distinct but forming a 'whole'. Songs that are in turn introspective, exuberant. Featuring three Allen Toussaint horn arrangements, the songs are  expertly executed and beautifully recorded, while firmly based in the strong groove orientated tradition that is so much a part of Jon's hometown of New Orleans.