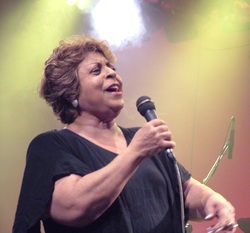 Leny Andrade, making the virtuosic and vigorous style of samba-jazz her field of expression, has acquired a solid reputation as a singer and improviser, acknowledged by the many top musicians who have performed with her, including Paquito D'Rivera, who considers her his favorite singer. Andrade's eclectic style became better defined with the advent of bossa nova, through which she introduced jazz elements into her singing. Finally, she opted for a synthesis of samba-jazz that refutes much of the delicacy bossa nova in favor of a more energetic interpretation.

In 1961, Andrade performed at the historic nightclub Bacará, accompanied by the Sérgio Mendes Trio and released her first album, A Sensação. Her international activities gained momentum in the eighties and nineties, a period in which she split her time between the U.S. and Brazil. While living in the U.S., she performed extensively at jazz festivals. In 1994, she participated in the Hollywood Bowl Festival, singing before 15,000 people, performed at Lincoln Center, and released her praised acoustic album, Coisa Fina, in duet with guitarist Romero Lubambo. In 1995, Leny Andrade was nominated for the Sharp prize as Best MPB Female Singer, released Letra e Música in duet with Cristóvão Bastos (an album dedicated to Jobim's original songs and lyrics) and participated in the Umbria Jazz Festival and in the fourth Blu Jazz Festival (Blumenau, Santa Catarina, Brazil). In 1998, she also participated in the JVC Jazz Festival, New York.

In 2007, Andrade performed at the prestigious Tanglewood Festival  and as part of the Bossabrasil Festival and earned a Grammy for her recording with Cesar Camargo Mariano.

To describe Ms. Andrade as both the Sarah Vaughn and Ella Fitzgerald of bossa nova only goes so far in evoking a performer whose voice seems to contain the body and soul of Brazil.
Stephen Holden - New York Times

“I have seen Leny Andrade and that is enough, as she is perfection.”
Wynton Marsalis

“She understands the words of a tune and breathes life into lyrics.”
Paquito D’Rivera