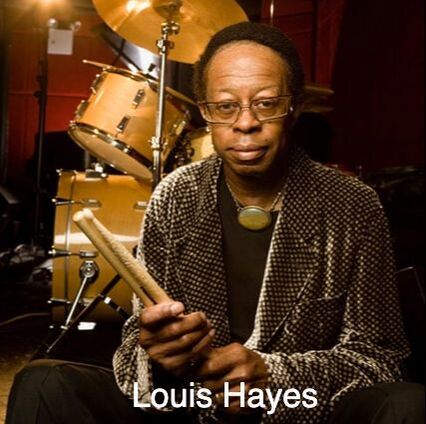 In 1956, a teenaged Louis Hayes journeyed from his hometown of Detroit to New York City on the recommendation of bassist Doug Watkins to play drums for legendary hard-bop pianist, composer and bandleader Horace Silver. It was a career-defining moment for Hayes because in November of that year he made his recording debut on Silver’s landmark album 6 Pieces of Silver on Blue Note Records, which featured the quintet’s indelible performance of Silver’s classic composition “Señor Blues.”

Now Hayes makes his own Blue Note Records debut as leader with Serenade for Horace, his splendid tribute to his mentor and friend. Co-produced by Blue Note Records President Don Was and bassist Dezron Douglas with the eminent Maxine Gordon acting as executive producer, the album shows Hayes leading a scintillating ensemble that includes Douglas, vibraphonist Steve Nelson, pianist David Bryant, tenor saxophonist Abraham Burton, and trumpeter Josh Evans. Hayes has been leading this particular combo for the past several years and the band demonstrates an intuitive rapport.

Hayes was 19 years old when he joined the first edition of the Horace Silver Quintet. Citing Philly Joe Jones and Papa Joe Jones as two of his earliest influences, Hayes had already gained a noteworthy reputation as a skillful drummer in Detroit after playing with such esteemed musicians as Yusef Lateef and Kenny Burrell. When Silver hired Hayes, the drummer recalls the pianist never giving him detailed instructions on how to play his music. “He just gave me some records to listen to. But actually I had heard these records in Detroit already,” Hayes says. “So I set my drums up and started practicing alongside the records. When we did the first album, I just listened to Horace play the piano and followed along.”

After 6 Pieces of Silver, Hayes continued playing with Silver’s quintet until 1959 – lending his intricate, dancing-sense of hard bop rhythms to such other treasured LPs as Further Explorations, The Stylings of Silver, Blowin’ the Blues Away, and Finger Poppin’. The discovery album Live at Newport ’58 featuring the quintet with Hayes was also released in 2008 after the tapes were found in the Library of Congress archive.

Even though Hayes’ tenure with the Horace Silver Quintet lasted only three years, he remained good friends with Silver until his passing in June 2014 at age 85. Hayes recalls visiting Silver at his home in New Rochelle, New York during his final years. “Horace and I would have these very serious conversations,” Hayes says. “He was a very private person; He didn’t want to be around too many other people during this time. But he wanted me to be in his company at this particular time in his life when he was getting ready to make that transition. He said, ‘Louis, you are a part of my legacy.’”

In the recent past, Hayes had been asked on several occasions to partake in various other Horace Silver tribute projects. But he declined the offers out of respect for his friendship with Silver. “I didn’t want to do anything just to make money,” explains Hayes.

It was Silver’s son, Gregory, who encouraged Hayes to record the tribute album. And once Hayes received the family’s blessings, he was insistent that the project be released on Blue Note Records. “The first time I ever recorded in my life was at Rudy Van Gelder’s home,” Hayes says. “I didn’t want to record this on any other label.”

Hayes’ enormous love and respect for Silver is felt immediately on Serenade for Horace. When he covers “Señor Blues,” “Juicy Lucy” and “St. Vitus Dance,” he accentuates Silver’s melodic ingenuity while subtly changing the rhythmic flow of the songs. For instance, Señor Blues” swaggers to a noticeably bluesier undertow than the percolating, Latin-tinged original, while “St. Vitus Dance” bounces to more a quicksilver pace. One of the more defining differences in the aforementioned renditions is the presence of Nelson’s sterling vibraphone work. “Having Steve Nelson there was very important because I didn’t want the same lineup that we did originally with the quintet. I had to change that,” Hayes explains.

In a strategic move, Serenade for Horace begins with fiery rendition of “Ecaroh” (Horace spelled backwards), an early Silver composition that was originally recorded with Art Blakey, who briefly co-led the Jazz Messengers with Silver. After Blakey and Silver went their separate ways, it was Hayes who immediately filled the drummer’s chair. Hayes brings equal amounts of sagacious spirit to the remaining Silver compositions, which spans from Silver’s early-’60s period to the early-’70s, when Silver was flirting with electric piano and jazz-fusion.

When Hayes left the Horace Silver Quintet in 1959, he joined forces with Cannonball Adderley and stayed until 1965. He then spent the following two years playing in Oscar Peterson’s trio. Hayes has performed and recorded with numerous titans of jazz including John Coltrane, Dexter Gordon, Freddie Hubbard, Joe Henderson, and McCoy Tyner.

Even though Hayes made his eponymously titled solo recording debut in 1960 on Vee-Jay Records, it wasn’t until the early-’70s when his career as a bandleader began to make significant noise – particularly his bands with Junior Cook and Woody Shaw. Hayes’ 1974 LP, Breath of Life (Muse) helped ignite his recording career as a leader.

Now a living jazz icon in his own right, the still effervescent Hayes makes his auspicious return to Blue Note Records, the label that helped launch his internationally renowned career. And for his 80th birthday, he will be celebrating the release of Serenade for Horace with a performance at Jazz at Lincoln Center’s Dizzy’s Club Coca-Cola. “I’m very happy with this album. I feel so magnificent about it because Don Was and the rest of people at Blue Note Records handled everything so wonderfully.”

“Louis Hayes is one of the chief architects of modern jazz drumming. He’s provided the rhythmic drive for historic recordings by Horace Silver, Cannonball Adderley, Oscar Peterson, Joe Henderson, Dexter Gordon, and McCoy Tyner. His playing has an intensity that is as subtle as it is complex, creating a musical feel and vibe that is unmistakably Hayesian.”
Jazz Times

“Hayes is on a select list of jazz’s most exciting, imaginative drummers.”
Jazz Times

“Drummer Louis Hayes is a man with a past and an eye on the future.”
Hot House Magazine