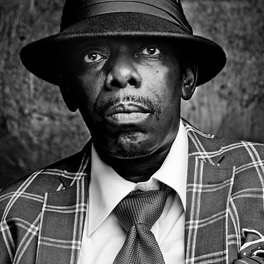 The multi-instrumentalist Lucky Peterson has garnered a reputation as one of the most riveting and meaningful performers of the modern blues era. A searing lead guitarist, a rich and thoughtful organist, and a first-rate vocalist, Lucky’s musicianship effortlessly translates gospel, rock, and jazz into a 21st century blues presentation.

A child prodigy, Lucky Peterson’s first record at five years old was produced by Willie Dixon, and included the R&B hit “1-2-3-4. This resulted in television appearances on the Tonight Show, the Ed Sullivan Show, and What’s My Line?, and his debut recording Our Future: 5 Year Old Lucky Peterson (Today/Perception Records 1969).  Growing up in Buffalo, NY, he attended the prestigious Buffalo Academy of Performing Arts before joining the touring groups of Etta James and Otis Rush. He has since performed and recorded with the most illustrious names in Blues and Gospel including Albert Collins, B.B. King, Bobby “Blue” Bland, Little Milton, and Mavis Staples.

His debut as an adult bandleader came in 1993 with I’m Ready on Verve. Following the success of I’m Ready, Peterson released three more recordings for Verve: Beyond Cool (1994), Lifetime (1996), and Move (1997). However, it was Lucky Peterson’s electrifying live performances that cemented his reputation as a modern Blues maverick.

The strength of his live concerts is captured on the DVD, The Lucky Peterson Band featuring Tamara Peterson Live at the 55 Arts Club Berlin (Blackbird Music, 2012), which was nominated for Best Live DVD at the 2013 Blues Music Awards. The Blues Music Awards also nominated Lucky Peterson for Best Male Blues Artist in 2013. His recording, You Can Always Turn Around (Dreyfus, 2010) won France’s Grand Prix du Disque in 2010 for Best Blues Album.

Lucky's forthcoming album, The Son of a Blues Man (Jazzbook Records, 2014) is a Blues, Gospel, and R&B tour de force, and is scheduled for release in the summer of 2014.

Many reminisce about the bygone days of the blues, but the flame of blues music still burns hot in the hands of Lucky Peterson.
Discography:
2014: The Son of A Blues Man – Jazzbook Records

2010: You Can Always Turn Around - Dreyfus Records