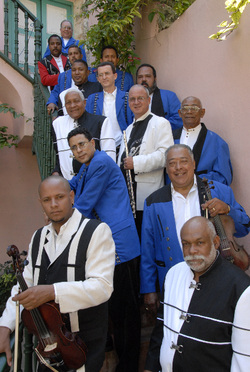 The importance of Orquesta Aragón to Cuban music is similar to that of the Duke Ellington Orchestra or the Count Basie Orchestra to American jazz.

Orquesta Aragón's extraordinary adventure started on September 30, 1939, when double-bass player Orestes Aragón Cantero brought his small charanga group to Cienfuegos, the third largest town in Cuba, for their debut.  The formation was comprised of three violins, piano, flute, percussion and one singer.  Orquesta Aragón would later expand into a 12-piece group, and go on to become one of Cuba’s most treasured cultural entities.

In the 1950s, Orquesta Aragón was signed to the American label RCA Victor, and found great success internationally spearheading the first wave of Cuban cha-cha-cha and mambo mania that captivated American audiences.  Then led by legendary violinist Rafael Lay, many historians cite this period as Orquesta Aragón’s apex.  Tours of the U.S., Europe, and Latin America would ensue only to be interrupted by the politics and the Cuban blockade in the 1960s.

Beginning in 1969, Cuba’s Radio Progreso began broadcasting the weekly Orquesta Aragón radio hour every Monday at noon. These broadcasts have become a listening staple, and 42 years later remains one of the most popular radio programs in Cuba.

Following renewed interest in Cuban Music in the 1990s, Orquesta Aragón would return to the United States for three successful tours beginning in 1999 including concerts at Carnegie Hall in New York, Orchestra Hall in Chicago, and Zellerbach Theatre in Berkeley.  Their 1999 CD, La Charanga Eterna, marked the sixtieth anniversary of the band's founding.

A tour of North America is being planned for the fall of 2012, and for the spring of 2014.
The Critics Speak:

“One of the most beloved and respected bands ever to come out of Cuba, Orquesta Aragón is still going strong.”
–Los Angeles Times

“From first to last, Aragon gave the Carnegie Hall audience an impeccable display of charanga feeling and deep cha-cha grooves.  In technique and soul, their playing and singing were an ideal representation of Cuban music.”
–Rhythm Magazine