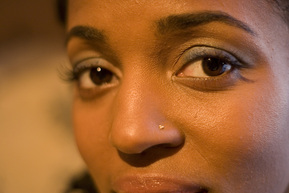 "You might not be aware of New York City jazz singer and performance artist Pyeng Threadgill...You should be." - Blues & Beyond 2004

On Pyeng Threadgill's third album, Portholes To A Love & Other Short Stories, Threadgill explores concepts of reality and magic, humanity and nature. With Pyeng's vibrant, caressing vocals and her band's rolling rhythms and revolving countermelodies listeners are enveloped in the clouds and put under a spell. From the lulling sensation of locomotion, to the secrets of the sea, the hopeless romantic, to the immigrant experience Pyeng uses lyrics lush in metaphor to depict a wondrous universe. She describes this musical experience as "Indie Jazz meets Afro Groove". Through Portholes To A Love & Other Short Stories, Threadgill earned a fellowship from The New York Foundation for The Arts in Music Composition.

Judging from Pyeng Threadgill's childhood her musical destinations seem a natural outcome. Born into an artistic family on the Lower East Side of New York in the 1970's at a time when Polish and Puerto Rican, Black, Chinese, and Jewish were all living in close proximity. Much of Pyeng's child rearing years were spent in black box theatres, community gardens, Jazz night clubs or on the road with her dancer/choreographer mother. These experiences proved just as influential as the early Soul/Jazz stylings of singers like Sam Cooke and King Pleasure that emanated from the stereo. Yet to round it out Pyeng kept her headphones loaded with a good dose of Depeche Mode, Tribe Called Quest, Al Green, and local alternative Rock bands. From this she went on to Oberlin Conservatory to study classical music. It was upon her return to familiar concrete, that Pyeng began searching for her own unique sound. She arrived at a new musical plateau which balanced improvisation and an eclectic repertoire with a healthy instrument. 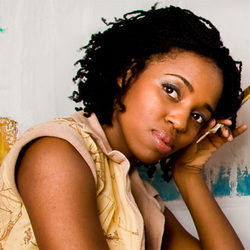 Pyeng Threadgill's music has been heard regularly on radio, in front of audiences as varied as New York 's iconoclast downtown venues Nublu and Joe's Pub, The Montreal Jazz Festival, Detroit Institute of The Arts, The Sun Side Jazz Club in Paris and more and even on the big screen. In 2006 Threadgill was asked to be a featured player in the documentary film starring Youssou N'Dour entitled "Retour A Goree" by director Pierre Yves-Borgeaud. Using impressionistic guitars, hard set grooves, keyboards, and swaggering horns, it is clear Pyeng Threadgill is as much a compelling storyteller as a bandleader.

Nowadays Pyeng attributes her vocal/musical aesthetic to her love for all styles of music from around the world. Her training as a teacher in the Alexander Technique (a practice for removing unwanted tension in the body) and Somatic Voicework have greatly affected her journey as a singer. Ms. Threadgill sees her general outlook on music as being part of the same African Diasporic worldview that understands the interconnectedness of all things.

Her upcoming fourth release began by researching lifestyles of African and Indigenous peoples as well as urban farming initiatives. It has evolved into a series of compositions based on both the outer landscape (the environment) and our own inner emotional landscape, which she performs with her six piece ensemble the Pyeng Threadgill/Songlines Project. Later this summer Pyeng will be releasing a live album from her performance at the Cognac Blues Festival. She continues to present work with her Of The Air Trio and other streams of her music collective.