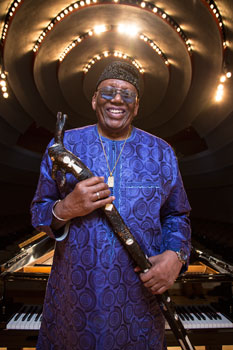 ​NEA Jazz Master Randy Weston is one of the world’s foremost pianists, a true cultural ambassador, innovator, and visionary.  He is both a riveting soloist and a dynamic leader of small and large groups, whose performance career has taken him to over forty countries throughout Africa, Europe, Asia, the Caribbean and the Americas.  A pioneer in world music, he introduced the western world to the Master Gnawa Musicians from Morocco and has toured with them extensively for five decades.  Mr. Weston is one of jazz music’s most respected composers, whose songs “Little Niles,” “Hi-fly,” and “Berkshire Blues,” are jazz classics that have been recorded by a multitude of artists.

Randy Weston’s current recording The African Nubian Suite, was released on the African Rhythms label in 2016. It is a tour de force that encompasses the whole history of Randy Weston’s music, and is a great follow up to his earthy duo recording with Billy Harper from 2013, The Roots of the Blues (Universal).

He is the recipient of some of the highest honors a musician can receive, including induction into the Downbeat Hall of Fame in 2016, the Lifetime Achievement Award from the Jazz Jounalists Association in 2015, the Doris Duke Award in 2014, a Guggenheim Fellowship in 2011, the ASCAP Jazz Wall of Fame in 2009, the French Order of Arts and Letters in 1997, among others. 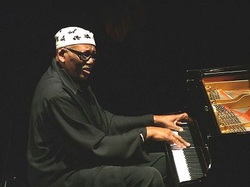 “Ancient Future, there are lots of heavy tunes here, played with the immense intelligence and character of one of our most important living musicians.”
– John Corbett, Down Beat Magazine

"Weston has the biggest sound of any jazz pianist since Ellington and Monk, as well as the richest most inventive beat, but his art is more than projection and time; it's the result of a studious and inspired intelligence...an intelligence that is creating a fresh synthesis of African elements with jazz technique."
– Stanley Crouch, Village Voice