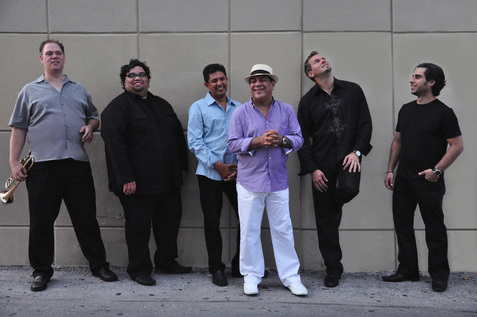 Sammy Figueroa has long been regarded as one of the world's great musicians. As one of the world's leading percussionists he has played on countless records, providing the rhythmical framework for hundreds of hits. Well-known for his versatility and professionalism, he is one of the few percussionists equally comfortable in a multitude of styles, from R & B to rock to pop to bebop to Latin to Brazilian to New Age. As one of New York's most sought after session players Sammy played on countless albums, jingles and film scores and appeared often on The David Letterman Band and the Saturday Night Live Band. He has recorded and toured with Miles Davis, the Brecker Brothers (for 12 years!), Sonny Rollins, Michel Camilo (who wrote the tune 'And Sammy Walked In' in his honor), Chaka Khan, David Bowie, and Mariah Carey (in her multi-million selling MTV Unplugged). Sammy's famed sense of humor, ebullient personality, and open-heartedness is famous within the music industry and has further empowered him in his connection with musicians and audiences alike.

While continuing his career as one of the world's leading sideman (for the last three years he has been touring in the band of Sonny Rollins), Sammy has also now established himself as a bandleader and artist. It is rare for a successful professional musician such as Sammy to make the transition from sideman to leader in what some might term "the middle years". Even more unlikely would be for both of this artist's first two albums to each be honored with Grammy Nominations. But since Sammy Figueroa became a leader in his own right the role has fit him comfortably, as if that was always his destiny. Sammy Figueroa is currently considered to be the most likely candidate to inherit the mantles of Mongo Santamaria and Ray Barretto as one of the world's great congueros. When Sammy plays percussion he tells a story, taking the listener on a journey.

Sammy Figueroa was born in the Bronx, New York, the son of the well-known romantic singer Charlie Figueroa. His first professional experience came while still a student at the University of Puerto Rico, with the band of bassist Bobby Valentin. During this time he co-founded the innovative fusion Brazilian/Latin group Raices. Raices was signed to a contract with Atlantic Records and Sammy returned to New York.

In the spirit of experimentation he has recorded and appeared with "New Age" artists such as Paul Winter, Glen Velez and Michael Schrieve and some of Europe's greatest electronica artists, including Vienna's dZihan & Kamien and the UK's Mark De Clive-Lowe. He has also taught numerous clinics and master classes in connection with his endorsement arrangement with Pearl Percussion.

In 2001 Sammy relocated to South Florida where he discovered a rich treasure trove of Latin jazz virtuosos from Cuba, Venezuela, Brazil, Colombia and Argentina, along with members of the University of Miami's extraordinary music department. In September 2002 Sammy Figueroa and his Latin Jazz Explosion made their debut at the Hollywood Jazz Festival, with special guests Dave Valentin and Ray Vega. Since that time Sammy and his band have been unstoppable and they are now one of the most exciting groups in Latin jazz today.