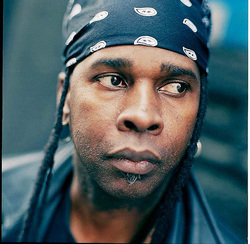 Vernon Reid was born in London, England but grew up in New York City, USA. Reid first came to prominence in the 1980s in the band of drummer Ronald Shannon Jackson. 1984's Smash & Scatteration was a duo record with guitarist Bill Frisell. In 1985, Reid co-founded the Black Rock Coalition with journalist Greg Tate and producer Konda Mason. Through the BRC, Reid hoped to counter the pigeonholing and marginalization of black musicians.

Vernon Reid is probably best known for leading Living Colour. Early versions of the group formed in New York City in 1983, but the personnel solidified in 1985-86, and Vernon led the group for about another decade.

Among the highlights: a double platinum-selling debut album Vivid, released in 1988; its gold-certified successor, Time's Up, released 1990; two consecutive Grammy Awards in the category of Best Hard Rock Performance; opening for the Rolling Stones' 1989 "Steel Wheels" tour; and appearing on the first Lollapalooza tour in the summer of 1991. Living Colour released Collideøscope in October of 2003 on Sanctuary Records.

Since the later days with Living Colour, he has used custom Hamer guitars. Vernon's very tech savvy, and his effects and amplification are always being updated.

In addition to his work with Living Colour, Reid has been engaged in a number of other projects. He released "Mistaken Identity", his first solo album in 1996 and has collaborated with the choreographers Bill T. Jones on "Still/Here" and Donald Byrd on "Jazztrain". He performed "Party 'Til The End of Time" at the Brooklyn Academy of Music (BAM) with The Roots, an end of the millennium tribute featuring the music of Prince's album "1999". He also composed and performed "Bring Your Beats" a children's program for BAM. 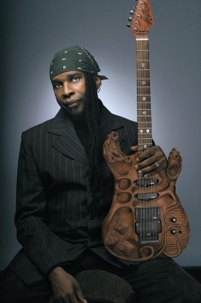 Vernon and DJ Logic, calling themselves "Yohimbe Brothers", released an album in September, 2002 called "Front End Lifter". The Yohimbe Brothers have been touring on and off since the release of the album. Reid is also the music supervisor for the film "Mr. 3000" starring Bernie Mac and directed by Charles Stone III; "Mr. 3000" is scheduled for release in the fall of 2004. Vernon's album with Masque (Leon Gruenbaum - keyboards, Hank Schroy - bass and Marlon Browden - drums), an instrumental album entitled "Known Unknown", was released in April 2004, and On April 18th, 2006 Vernon Reid and Masque released "Other True Self", both on Favored Nations records, owned by another guitarist, Steve Vai.

In March of 2007, Vernon played with Jamaaladeen Tacuma, and G. Calvin Weston at Tonic in NYC, and Tritone in Philadelphia, which led them to record as Free Form Funky Freqs with the title of the recording called Urban Mythology Volume 1. European Tour in November and a soon to be released CD.