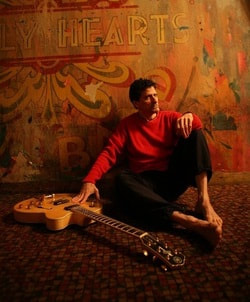 Brazilian singer/songwriter/guitarist Vinicius Cantuária is currently touring one of the finest musical ensembles of any genre.  Drawing from the rich history of Brazilian music and integrating it with jazz, avant-garde and pop, Vinicius Cantuária’s music is like a rolling rhythmic whisper filled with dramatic turns and stunning sonic ideas.

The music of Brazil has left a treasure trove of unparalleled compositional gems, none as beloved as the catalog of Antonio Carlos Jobim. A genius in utilizing the cool of jazz, the seductiveness of Brazil and the words of a poet, Jobim has left a wake that has rocked the musical world with the spawning of the bossa nova movement. All contemporary Brazilian musicians are indebted to Jobim so it is only natural that one of the most important Brazilian voices of the past two decades perform a tribute. On Vinicius canta Antonio Carlos Jobim, the great vocalist/composer/guitarist Vinicius Cantuaria performs the work of Tom Jobim solo and with the help of some truly amazing co-conspirators, including guitarist Bill Frisell, pianist/composer Ryuichi Sakamoto, vocalist and MPB legend Joyce and jazz-pop sensation Melody Gardot.

For over four decades Vinicius Cantuária has been one of Brazil's most accomplished songwriters.  His compositions "Lua e Estrela" and "So Voce" are MPB (Musica Popular Brasileira) classics that sold over 3 million copies each in the 1980s and 1990s. Despite this success, Cantuária left the Brazilian pop scene in 1994 and moved to Brooklyn, New York in an effort to redefine the art form of Bossa Nova which he so desperately loves. The results are a captivating Nova Bossa Nova, which is deeply influenced by music of his heroes: Miles Davis, Chet Baker, Bill Evans and Antonio Carlos Jobim.

In New York he became a sought after percussionist, guitarist, singer and muse by bold-faced names from jazz and the avant-garde to pop. Many of them -- from David Byrne to Jesse Harris, Melody Gardot to Norah Jones, Ryuichi Sakamoto to Caetano Veloso, Bill Frisell to Arto Lindsay -- have, in turn, been eager to guest-star on Cantuaria's own releases. Best known among his extra-curricular efforts are his collaborations with Bill Frisell, in a duo and concert program that resulted in the recording, Lagrimas Mexicanas (Naïve, 2011), and  as a member of the Grammy-nominated jazz-meets-world music quartet “The Intercontinentals”.Cantuaria's almost instantaneous cult star status in New York City was no mere lucky break.  He arrived with just the right resume at a time when the sounds of Brazil past and present were increasingly attracting curious musicians and audiences.

In 2014 he returned to live in Rio De Janeiro, Brazil, where he recorded Vinicius Canta Antonio Carlos Jobim (Sunnyside, 2015). In 2017 Vinicius Cantuaria will release a project dedicated to Brazil’s two most famous Rivers, the Amazon and the Rio Negro, titles “Sounds of the Rivers”.

With critically acclaimed concert performances at some of the most prestigious festivals and concert halls including the North Sea Jazz Festival (Holland), Jazz A Vienne (France), The Blue Note Tokyo (Japan), The Vancouver Jazz Festival (Canada), The Blue Note New York (U.S.A.), The SFJAZZ Center in San Francisco (U.S.A), Sydney Opera House (Australia), and The Barbican and Queen Elizabeth Hall (London, UK), he continues to wow audiences throughout the world.

"The bossest nova…"
-The Independent on Sunday (London)

"Cantuária offered a set that was a masterpiece of contemporary music, regardless of definition."
–Los Angeles Times

"Cantuária's skills as a singer and guitarist have turned him into a mesmerizing live act."
-Time Out NY

“In just 10 tracks, Cantuária reveals all of the restless beauty that is the new bossa nova, highlighting a timeless, romantic appeal and a hunger to bring more sounds into the fold.”
-College Music Journal