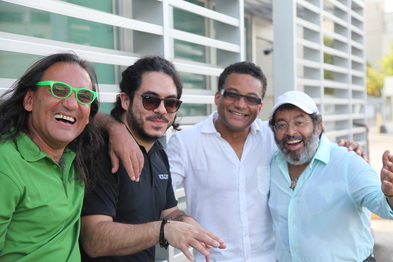 Jose Armando Gola
Havana native Jose Armando Gola has played bass since the age of thirteen. He attended the Amadeo Roldan Conservatory in Cuba. He plays both upright and electric bass in various setings and has toured internationally, having played at most of the important jazz festivals of the world. Only in his mid-20s, he as worked with Gonzalo Rubalcaba for the past seven years.Gola has appeared on two GRAMMY® Award Winning albums: RUMBA PALACE (Arturo Sandoval) and El Tren De Los Momentos (Alejandro Sanz). Gola has also appeared on three GRAMMY® nominated albums: PASEO (Gonzalo Rubalcaba), CODES (Ignacio Berroa) and TE ACUERDAS (Francisco Cespedes).

Horacio "El Negro" Hernandez
Horacio Hernandez “El Negro” is a gifted musician who represents a new generation of great players following in the footsteps of countrymen Arturo Sandoval, Paquito D’Rivera, Ignacio Berroa and others. Hernandez plays on the cutting edge of today’s music with technical prowess and versatility. His drumming also reflects a proud musical heritage rooted in folklore tradition.

El Negro first gained international recognition as the drummer for the extraordinary pianist Gonzalo Rubalcaba and his group Proyecto. Since leaving Cuba in 1990, Hernandez has made a name for himself in the U.S. with his live performances with many different pop, rock, jazz and Latin jazz acts and his appearances on many different albums, some of which have received Grammy awards, like Roy Hargrove‘s HAVANA (1997), Carlos Santana‘s SUPENATURAL (1999), Alejandro Sanz‘ NO ES LO MISMO (2003) and Eddie Palmieri‘s LISTEN HERE (2005). He owns a Grammy award for the 2001 Latin Jazz album LIVE AT THE BLUE NOTE, with Michel Camilo(piano) and Charles Flores (bass). Since 2004 he records and tours with his own band, Italuba. In 2011 he played at the Modern Drummer Festival with his new band The New World Order, the concert was also released on the Modern Drummer Festival 2011 DVD.

Giovanni Hidalgo
Legendary percussionist Giovanni Hidalgo was born in Puerto Rico in 1963 and grew up in a home filled with drums, bongos, congas and timbales used by his father and grandfather, both musicians themselves.

Hidalgo began playing on a home made conga crafted by his father from a wooden barrel, when he was just eight years old. He also practiced on other percussion instruments, applying his great talent to become one of the top Latin percussionists in the world today. The sounds other drummers create withsticks, Hidalgo creates with his hands. His lightning fast  precision is particularly admired by others.

Hidalgo first became popular outside his native Puerto Rico in the early 1980’s. In 1981 he went to Cuba to work with Batacumbele. There he met Changuito and Hidalgo’s career took a different turn. The two artists were perfectly attuned to each other and this was evident in Batacumbele’s debut album. That effort, featuring Hidalgo’s incredible hand drumming technique gave him instant prominence among musiciansaround the world.

As much as Hidalgo drew inspiration from the Cuban musicians he performed with, they to took something away from the experience. Many tried to replicate Hidalgo’s technique and incorporated it into their style of music called songo. This effect was mirrored in Puerto Rico as the Cuban style musicand was a smashing success.

But the rapport and life-long friendship with Changuito was a precursor to a similar relationship that Hidalgo forged with American jazz legend Dizzy Gillespie, just a few years later. Hidalgo met Gillespie while performing with Eddie Palmieri in New York. Gillespie liked what he heard from Hidalgo and suggested a future collaboration. The future came in 1988 when Gillespie recruited Hidalgo to play with him in the United Nations Jazz Orchestra.

In 1992 Hidalgo accepted a teaching position at Berklee College of Music in Boston. He remained there for four years of which Hidalgo said, “I was teaching and learning at the same time.  I put together all types of rhythms — Puerto Rican, Cuban, Dominican, reggae, African and jazz,” with songs like Bahia San Juan from the VILLA HIDALGO album.

Gonzalo Rubalcaba
May 27, 1963, Gonzalo Julio Gonzalez Fonseca was born in post-revolutionary Havana into a musical family rich in the traditions of the country’s artistic past. During his childhood, in addition to the standard fare of elementary schools, Gonzalo absorbed the Cuban musical heritage of his nascent environment through personal contacts within his family, notably his father, pianist Guillermo Rubalcaba and his two brothers (pianist and bassist) as well as from leading musicians who were frequent house guests: Frank Emilio, Peruchin, Felipe Dulzaides and others. He also assimilated, through scarce and treasured recordings, the tunes and styles of 40’s – 70’s US jazz masters: Thelonius Monk, Bud Powell, Oscar Peterson among pianists; and instrumentalists Charlie Parker, Dizzy Gillespie and Art Blakey. Gonzalo loved drumming and early in his career studied both piano and drums. Despite the diversity of his background, Gonzalo’s initial formal musical training was entirely classical. He began his training at Manuel Saumell Conservatory at age 9, where he finally chose the piano as his main instrument. He moved up to middle school at Amadeo Roldan Conservatory and finally earned his degree in music composition from Havana’s Institute of Fine Arts in 1983.

By that time he was already playing in clubs and music halls in Havana. He toured France and Africa with Orquesta Aragon in 1980 and introduced his own Grupo Projecto to the North Sea and Berlin Festivals in 1985. Egrem Studios of Havana was the first to record his music during the early and mid ’80’s and these discs, INICIO, an album of piano solos and CONCIERTO NEGRO, are still available. Beginning in 1986 Gonzalo began recording for Messidor of Frankfurt, Germany and put out three highly acclaimed albums for that label with his Cuba Quartet entitled MI GRAN PASION, LIVE IN HAVANA, and GIRALDILLA. On the strength of those works Gonzalo began attracting international attention and in 1986 a chance meeting in Havana with bassist Charlie Haden brought him to the attention of Blue Note Records‘ president, Bruce Lundvall, and thus began an association first with Toshiba/EMI of Japan and later with Blue Note in the US which resulted in 14 discs being released.  In July 1990, he appeared as a surprise guest in an historic performance, available on the CD Discovery with Charlie Haden and Paul Motian (ex Bill Evans trio members) at the Montreux Jazz Festival, Switzerland.

Further works eventually brought Gonzalo both a Latin Grammy for Jazz Album of the Year, SUPERNOVA, as well as a Grammy for co-production with Charlie Haden on NOCTURN, a Verve release of Cuban and Mexican boleros and ballads. Gonzalo has to his credit 15 Grammy nominations, including five for Jazz Album of the Year, RAPSODIA in 1995, ANTIGUOAND INNER VOYAGE in 1999, SUPERNOVA in 2002, AVATAR in 2008. Among recent honors, in June 2001 Gonzalo received the SFJAZZ Leaders Circle Laureate Award and in 2002 he performed as Artist-in-Residence at the Montreal Jazz Festival together with Chucho Valdez.

Gonzalo has performed with the likes of Dizzy Gillespie, Ignacio Berroa, Chick Corea, Al DiMeola, Herbie Hancock, Charlie Haden, Katia Labeque, Richard Galliano, Francisco Cepsedes, Tony Martinez, Issac Delgado, Juan Luis Guerra, Dave Holland, Chris Potter, Eric Harland, Dennis Chambers, Brian Bromberg, Ron Carter, Yosvany Terry, Matt Brewer, Mike Rodriguez, Marcus Gilmore, Pat Martino, Giovann Hidalgo, John Patitucci, Jack DeJohnette, Joao Bosco, Eric Harland, Ivan Linz and many others. Gonzalo continues to tour the world as a solo pianist in jazz and classical settings as well as band leader, employing the worlds top sidemen in club and concert engagements. His active repertoire has continued to expand beyond straight-ahead, bop, Afro-Cuban and other forms of jazz into the worlds of traditional Cuban and Mexican ballads, boleros and Cuban classical works. He has developed his own very distinctive voice, challenging the traditional musical classifications of the day. His art continues to evolve and draw inspiration from both his Afro-Cuban heritage and the world around us.Our Maestro will continue shaping and reshaping the themes, forms and rhythms which have provided him with inspiration for his life’s work. In whichever idiom he works, his future musical creations will be melodious, rhythmic, exciting and bear in their intriguing intricacies the artist’s inherent intention of transforming the daily routines of our lives into something more beautiful and significant. Gonzalo now produces and records for his own record label and production company, 5Passion LLC, founded in 2010.